Happy New Year everybody! I had a good Christmas break away from London. Chilled out at my parent’s place in Southwell, Nottinghamshire over Christmas until 28th December which was really nice. Then I headed off to Italy for a week to visit a friend. After 2 days in Milan we headed up to The Alps for New Year, which was absolutely fantastic.

Now I’ve managed to grab a few more minutes, here’s the edited version with some more details about the holiday. Valle de Rhemes is a small valley that connects to Valle d’Aosta, just a short trip from the foot of Mont Blanc, or rather on this side of The Alps, Monte Bianco. It’s a really pretty little valley that is much quieter than much of the surrounding area. This is largely because apparently the skiing isn’t as good in this valley, however that doesn’t bother me at all. I have a form of arthritis so skiing is pretty much out of the question and for walking it’s very pretty. 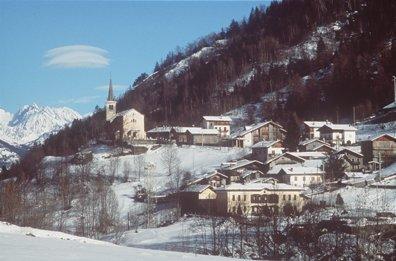 The photo shows Rhêmes-Saint-Georges which is the village where we stayed. I think in this photo our apartment was one of three in the house on the far right about half way up the picture. It was a nice, simple but well equipped apartment that my friend’s brother has rented with friends for about 6 months so that they can come and go as they please. They all live in Milan so it’s only about a 2 hour drive. Perfect for impromptu weekend breaks… lucky dogs!

There was lots of trying of local food and drink. Firstly there was grolla or the coppa dell’amicizia (cup of friends), a wooden bowl with multiple spouts to drink from so that it is passed around the group. There are two main mixed warm drinks served from the grolla. One is wine based and the other is coffee followed by ludicrous amounts of spirits. Very strong! There was also raclette, which is more of an Alpine speciality in general rather than a particularly local one, involving a selection of cold meats, baked potato and cheese that melts steadily under a heat lamp so that you scrape it off on to your plate when you’re ready. (This can become a real race against time!) Another dish was polenta which is pretty much the same as grits, served with all different sauces. The mushroom topping was probably my favourite.

I’ll leave you with my recipe for the grolla (from memory!) as I watched the barman intently as he created the drink that would ultimately make me feel very “fuzzy”. Fortunately it didn’t seem an exact science anyway:

Take the grolla and tip a few glasses of red wine in. Then some shots of grappa. Then loads of sugar, some eggnog and some quantro. Throw in some orange peel. Carefully sprinkle sugar around the rim of the grolla. Pour grappa over the sprinkled sugar. Sprinkle more sugar over the grappa. Add a few cups of espresso. Then set fire (yes, set fire) to the contents of the bowl. Carefully, so as to avoid 3rd degree burns! Serve flaming. Put the lid on the grolla when you think the contents are hot enough to extinguish the fire. I wouldn’t leave it for more than about 30 seconds if I were you. Then drink and be rather more merry than you perhaps originally intended!