They are five villages, five enchanting lands, each with a soul all its own. Liguria’s Cinque Terre (Five Lands) are a set of ancient seaside villages suspended high atop the cliffs on the rocky crags overlooking the Mediterranean. Linked by an age-old coastal pathway, the only way to really appreciate the magic of the area is to walk from one to the other, as countless generations of rugged Ligurians have done before.

Carved out of solid rock by hand, the villages are surrounded by scrupulously maintained, terraced vineyards, whose flourishing beauty is artfully defined by centuries-old stone walls. The Cinque Terre provide one of the most pleasantly surprising landscapes in all Liguria, strung between La Spezia and Levanto (a sixth Cinque Terre), like pearls on a chain.

Carved out of solid rock by hand, the villages are surrounded by scrupulously maintained, terraced vineyards, whose flourishing beauty is artfully defined by centuries-old stone walls. The Cinque Terre provide one of the most pleasantly surprising landscapes in all Liguria, strung between La Spezia and Levanto (a sixth Cinque Terre), like pearls on a chain.

Riomaggiore is the best point of departure to set off along the “Via dell’Amore”. This typical seafarer’s village, is characterized by its 14th-century church and the unique old houses, tall and narrow, which sprang up around it over the centuries. The first destination, Manarola, is just half an hour away. The final section of the path, carved into solid rock, is particularly fascinating, tracing the shoreline from on high.

Manarola comprises a cluster of old houses weathered over the years by the wind and waves, constructed on a sheer drop leaning out over the sea. Hardy hikers are challenged to scale the additional 1000 steps which lead the way to the Nostra Signora della Salute di Volastra sanctuary. 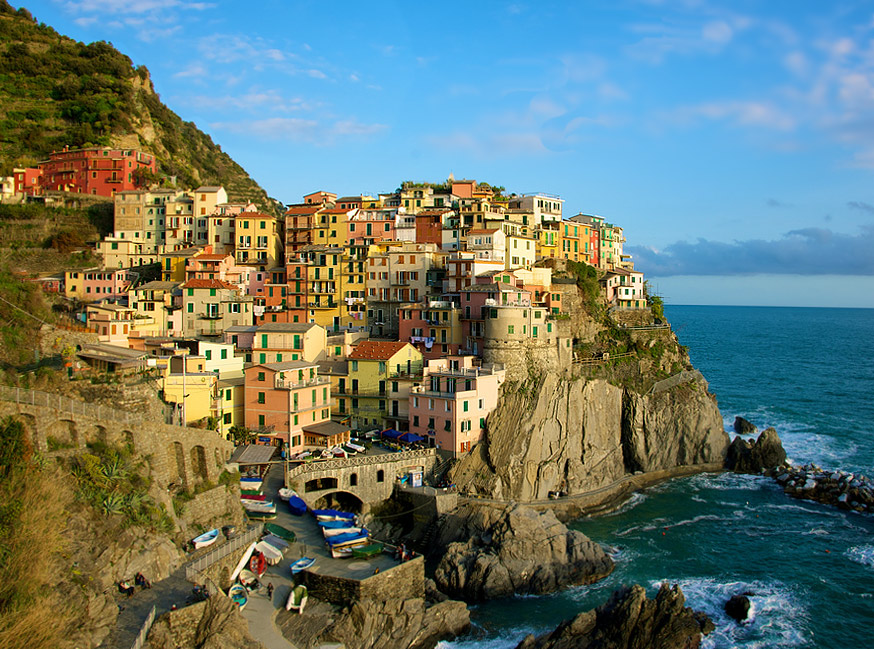 Leaving Manarola, the path leads on towards Corniglia, perched upon a perilously high rocky terrace, suspended a hundred meters above the sea, and characterized by the enchanting 14th-century chapel of San Pietro, an excellent example of Ligurian Gothic style. The path continues on past countless olive trees and grapevines. These grapes are transformed into the rare and delightful “sciacchetrà”, a golden-yellow dessert wine with a high alcohol content and most unique flavor. Never, ever pass up a taste, if it’s offered… Continuing on it’s way, the path descends a stairway to the village of Vernazza.

The village of Vernazza forms a semicircle around the Cinque Terre’s largest and most attractive little harbor. Lined by holm-oak, gorse and juniper bushes , the pathway heads downwards once again, toward the village of Monterosso, hideaway of the Genoese poet, Eugenio Montale, who won the Nobel prize in 1975.

The old village of Monterosso is known for its clusters of tower-like houses joined by an intricate network of narrow alleyways. The residential area is tucked in between the sea and the wine-grapes and olive groves clinging to the hills behind. Its splendid beaches, breathtaking cliffs and crystalline waters render this village one of the most attractive to tourists along this part of the Ligurian Riviera. Anyone not in a great hurry, should take the walk up to the 18th-century Santuario di Soviore – the view it affords is priceless.

Visitors to the Cinque Terre would be well advised to add a sixth stop – the charming town of Levanto to their list, as well as Portovenere at the edge of La Spezia Gulf, at the tip of a peninsula. It’s an ancient village, dominated by the impending presence of a 16th-century Genoese castle.